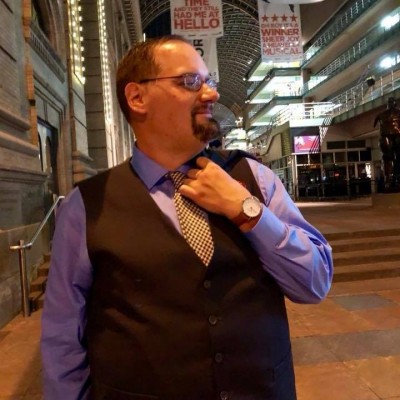 Chris T. Parr, is the Executive Director of the St Vrain Theatre Company and owner of Shadow Man Marketing.

He has performed with the Longmont Theatre Company, LTC's Standing Room Only & the Wing & Prayer Theatre Company. While working with the Longmont Youth Theatre he directed several teen productions including the Colorado premiere of 4 AM the Musical. He also began taking the company to the Colorado Community Theatre Collation festival where the company has won several awards including the Techtinublation Award. With the St Vrain Theatre Company he has expanded the mission of helping youth programs as well as pushing the idea of theatre in Strange Places. As well as continuing to participate in the Colorado Community Theatre Collation Festival.

He has worked with dance companies, community theatres, production companies, and high school theatres all over the state. Helping them with everything from set design and stage management to ticket sales and social media promotion. He was the Road Manager for Frederick High School's 2018 Thescon Mainstage production of Newsies.

He has a BA in Digital Marketing. Which has helped him work with marketing companies all over the country as well as non-profits. He has helped them create grass roots campaigns to help promote new products and programs.

One Act From A to Z


So you decided to direct a one act. Maybe you are trying to do a night of student directed one acts.
But you don’t know where to start.
Maybe you have started but now are lost and need help.
This workshop will run over the basics and then offer a question and answer section to help with any and all problems. From picking a one act to getting the show off and running.

Theatre Everywhere But the Theatre


This workshop will focus on theatre outside of the box. How you can take your show on the road. How you could actually do the show in a coffeeshop, even on a street corner, in an amphitheater, even in a remote corner of your school or in 24 hours. As well as the newest concept of Theatre on the Move. As well as how to take your show on the road. Chris Parr and members of the St Vrain Theatre Company have become experts in the idea of theatre in strange places or GUERRILLA Theatre.