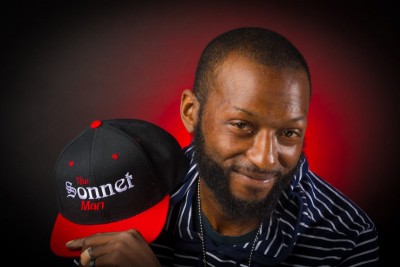 Devon Glover is a teacher, rapper, poet, playwright and actor from Brooklyn New York. He performs Shakespeare's Sonnets in a dynamic way through Hip-Hop in schools, universities, and theaters to young audiences nationally and abroad.  As The Sonnet Man, Devon has appeared on NBC, MSNBC, BBC, and Educational Conferences and Shakespeare Festivals throughout the world, including Oregon, Stratford, Ontario, and Stratford-upon-Avon.  The release of his debut video “Hip-Hop Hamlet” was selected for the Shakespeare Short Film Festival in Stratford-upon-Avon.  In April 2016,  Devon went on a #SonnetMarathon tour through the US, UK, and Morocco—where he rapped all 154 of Shakespeare’s sonnets in succession on April 24th. Some of the notable roles Devon has played is Touchstone in Shakespeare’s “As You Like It” (Southern Shakespeare Company), Flute/Thisbe in ”A Midsummer Night’s Dream” (Yosemite Shakes), Lyons in “Fences” (Canopy Roads), and Clarence/Tyrell in “Richard III” (Salty Shakespeare). In the Fall 2017, Devon co-wrote “A Town Divided”, an adaption of “Romeo and Juliet” that was based on the racial divide in Tallahassee, FL.  In the Spring 2019, Devon was commissioned by the University of Warwick and Shakespeare Birthplace Trust to write a hip-hop adaptation of Shakespeare’s “Twelfth Night” for high schools. For more information, visit www.SonnetMan.com