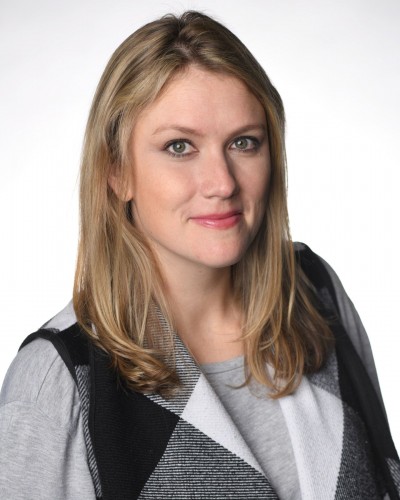 Elise Kulovany serves as the resident costume shop manager in the CSU costume shop as well as teaching and designing productions for the School of Theatre, Music and Dance. Elise is a Fort Collins native. After graduating from Rocky Mountain High School, Elise went on to get her B.S. in Theatre Education from the University of Evansville where she participated in many productions as well as taught theatre classes at various high schools and middle schools in the Evansville Area. She then earned her M.F.A in Costume Design from Southern Illinois University. While at SIU Elise worked as a draper, stitcher and craftsperson in the costume shop. She also designed Ragtime, For Colored Girls Who Have Considered Suicide When the Rainbow Is Enuf, Radio Golf and RENT in addition to teaching Introduction to Costume Construction and Makeup for the Theatre. After earning her MFA, Elise served as a costume shop apprentice at the Santa Fe Opera for two seasons. She then worked as the draper and costume shop manager at The Arkansas Repertory Theater before joining the faculty and staff at Los Rios Community College where she taught scenic construction and designed sets for Raisin in the Sun and The Velveteen Rabbit. Selected credits include: The Little Mermaid, Macbeth, Bridges of Madison County (Regional Premiere), Mary Poppins, Elf the Musical, and Memphis the Musical. Her passion lies in creating art and working with students. Elise thoroughly enjoys working at CSU and sharing her knowledge of pattern making, dyeing, tailoring and more with anyone wanting to learn. You can view Elise’s work at www.elisekulovany.com


This workshop will present a variety of ways to duplicate items large and small for theatre productions and scale models, using techniques we’ve employed at Colorado State University as well as working on regional and Broadway and Off-Broadway shows.

Students will leave with (cast copies) of their severed fingers.

Mini Me: Intro to Draping Costumes on a Small Scale


Participants will create a costume for a character on a small scale, on 1/2-size dress forms. They will be first introduced to basic principles of draping used in both regional and Broadway theater costume shops, and then make their ideas come to life on a half scale dress form. All levels of students welcome.