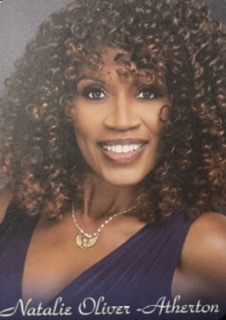 I’m Natalie Oliver-Atherton, and I’m the creative force behind The Namaste Works Arts Alliance. Let me tell you a little story. Close your eyes, and picture Julie Andrews, twirling and singing on the mountaintop. You remember… you’ve seen the movie… who hasn’t? The hills are alive! I was four years old when I saw that movie, and it filled me with inspiration and passion. How can I grow up to be a singer, and to see the whole big world while I’m at it? Well, I’m blessed to be able to say I’ve done it. This American girl did grow up to be a professional singer/actress, instructor and coach, and from small-town street performances to big-time feature film appearances, I’m happy to say I’ve seen the arts, I’ve seen the world, and I’ve seen the power of cross-cultural arts experience. It changes your life.

It's been said that she could sing before she could speak in cogent sentences.  And by the time she was thirteen she’d already tucked choral directing and conducting under her belt as her childhood church music director.  Professionally it began at age 17 as a soloist at Carnegie Hall and culminated years later in the French Riviera for the late Prince Rainier of Monaco.

As a singer/actress her performance credits include the roles of the Gypsy Acid Queen in two international tours of the Who's Tommy (Germany/Canada); Constance in David Merrick's Oh, Kay!; Andrea Devereaux in Once on This Island; A Brief History of White Music. She can be seen in the feature films: Mississippi Masala (opposite Oscar winner Denzel Washington) and Amazing Grace & Chuck (with Jamie Lee Curtis and Gregory Peck).  Regionally, she was Mary Magdalene  in Jesus Christ Superstar; Ronnette in Little Shop of Horrors, Annie in Porgy & Bess and Mayme in Intimate Apparel, for which she received a Denver Post Ovation Award nomination for best supporting actress in a musical. Most recently, after a 14 year hiatus, she starred in the new musical Trav’lin with Broadway veteran, Milton Craig Nealy.  She has also performed as the soprano soloist with the Colorado Symphony Orchestra (Duke Ellington's Sacred Concert & Too Hot to Handel); and the Florida Orchestra, Baltimore Symphony, and Sinfonia Gulfcoast.

She has headlined at the former Stardust Hotel & Casino in Las Vegas in their original production "Enter the Night".  Another highlight in her career was the honor of opening for poet laureate, Dr. Maya Angelou.  She has appeared as Mother Wisdom in a new opera about the life of Mary Magdalene (Woman of Light) and received a second Denver Post Ovation Award nomination as best supporting actress in a musical.

Natalie currently resides just outside Denver, CO with her husband Jeffrey of 25 years and is the proud mother of three beautiful children (Justin 28, Rachael 23, and Serea 19).  She and her husband are instructor/coaches of their own private vocal and acting studio, the Namasté Works Vocal & Acting Studio. And she is the proud Executive Director of a new non-profit, The Namaste Works Foundation d/b/a The Namasté Works Arts Alliance whose mission is to identify and assist talented young adult performing artists to the next stage of their development and guiding them to become Ambassador’s for Humanity while paying forward those gifts talents and abilities.

SLAYING the Audition: a boot camp for the SERIOUS performer.


In this workshop, sharpen and refine your technique so you can slay ANY audition. From college pre-screens, to your school play or musical, to working professionally in the industry, this boot camp provides you with the knowledge and hands on experience to up-level your skills. This mini-intensive comes with an invitation to audition for summer 2023 opportunities with Denver’s best and brightest performers.
Bring your A+ game and the desire to take it up a notch!