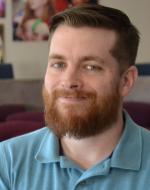 Nate Jones is a Community Relations Specialist for the Douglas County School District. Before arriving in Douglas County in 2015, he spent nine years as a public affairs specialist and combat documentarian for the U.S. Army, covering the story of soldiers in Germany, Iraq, and the Pentagon through television and radio. He is the proud father of 3 amazing kids, 3 crazy dogs, and 2 mischievous cats.


In this workshop, you will learn the importance of audio, best practices for collecting sound in the field, and how to edit sound into your film or video.